Through the Strings: How Tennis Fueled Roger Crawford to Aim High 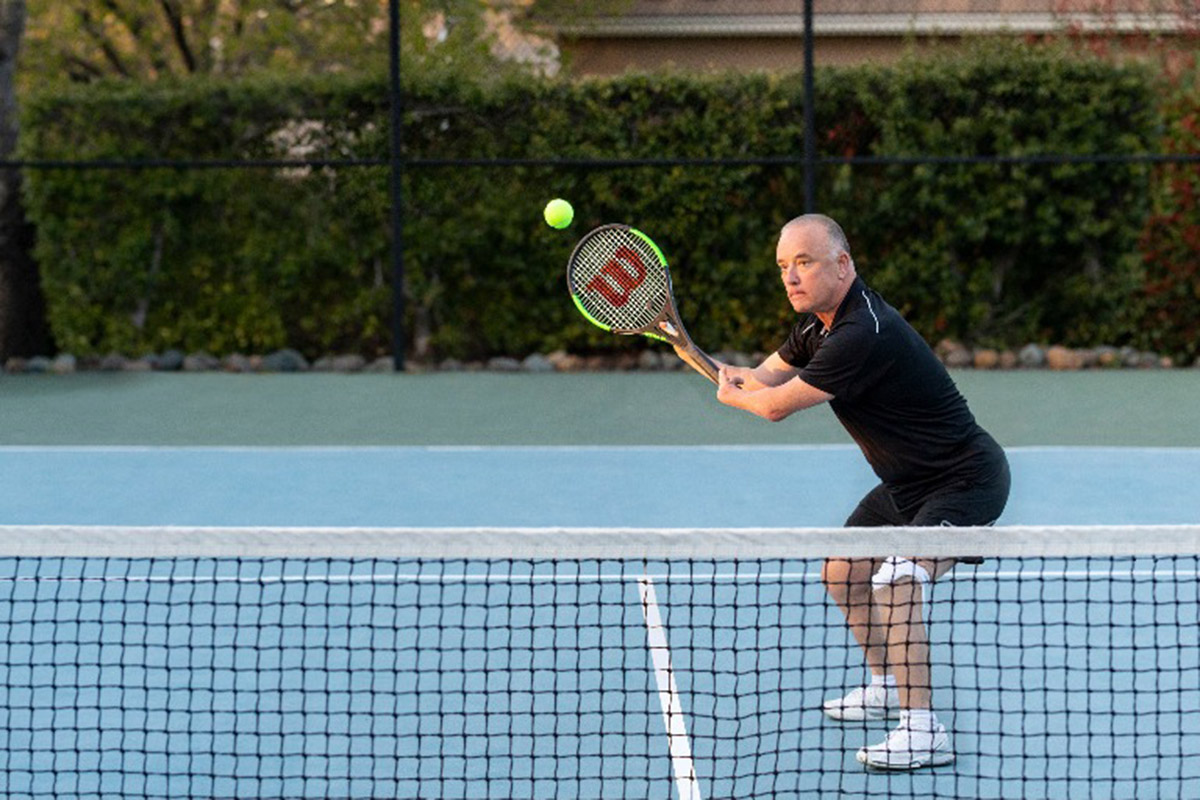 For 30-year USPTA Professional Roger Crawford, the odds have always seemed stacked against him. Born with a physical challenge that affected all four of his limbs from the elbows and knees down, Crawford could have let his disability limit him. But he found inspiration and the drive to succeed through the game of tennis.

“People reading this may wonder, wow, how did this guy get involved in tennis? I got involved in tennis because first and foremost, it was a sport that I could play by myself,” Crawford said. “I learned how to play against a backboard. Tennis for me was much more than a game, it was something that I could point to and say, ‘I do that well’ and it made me feel like I was like all the other kids.”

To participate in the game he loved, he had to first learn how to hold a tennis racquet. Crawford looked high and low for a racquet that he could hold on to and call his own until one day he came across the “holy grail of tennis racquets,” the Wilson T2000, the game’s first stainless-steel frame. From the look, the feel, and the grip, Crawford knew the moment he laid eyes on the Wilson T2000, that it was meant just for him.

“The Wilson T2000 had two parallel bars from the head of the racquet to the grip,” Crawford said. “My right finger fit perfectly in between those two parallel bars. It was a perfect fit and that was how I learned how to hold a tennis racquet.”

As his game improved throughout the years, Crawford set his sights on playing competitively. He played on his high school tennis team at Monte Vista High School in Danville, California and played all four years at the NCAA Division I level at Loyola Marymount University in Los Angeles, where he became the first athlete with a physical challenge affecting all four limbs to compete in an NCAA Division I sport. He also played as high as #3 in doubles, #6 in singles and posted a career record of 22-11.

“By no means was I the best player on my team, but I did play Division I college tennis and people always ask well how that happened,” Crawford said. I focused on what I could do and what I could control. I wasn’t the fastest nor the strongest, but I learned that if I could be consistent hitting the ball over the net, I gave myself a pretty good chance of being successful.”

After graduating from Loyola Marymount University, the Granite Bay, California native became a renowned motivational speaker where he speaks at between 75 – 100 meetings a year for a variety of different industries. His clients have included companies such as Amazon, Boeing, Coca-Cola, Microsoft, Nike, Wilson, etc. and has been featured on national media outlets such as CNBC, Good Morning America, Tennis Channel, Wall Street Journal and many more. Through the motivational speeches he gives throughout the country, Crawford said he shares many of the lessons he learned through the game of tennis.

“I think there are some parallels that you can draw from success on the tennis court to success in life,” said Crawford. “So, when I’m standing in front of a group I’m not talking about myself, I want my motivational talks to be about them. I want to impart thoughts and ideas that can motivate and inspire my audiences to do more and be more.”

Along with his motivational speeches at Fortune 500 companies, Crawford is also a frequent contributor on Tennis Channel with his weekly segment called Motivational Monday’s with Roger Crawford. But his achievements came full circle in 2013 when he was awarded the ITA Achievement Award at the ITHF Board of Directors Meeting at the Grand Hyatt Hotel in New York. The ITA Achievement Award pays tribute each year to past participants in the world of collegiate varsity tennis who have achieved excellence in their chosen careers.

“The ITA Achievement Award was one of the most cherished honors of my life,” Crawford said. “To be recognized for achievements and contributions off the court is something I will never forget.”

To go along with the ITA Achievement Award, he also earned more honors under his belt such as being inducted into the Loyola Marymount Athletic Hall of Fame, the National Hall of Fame for Persons with Disabilities, the National Speakers Association Hall of Fame and has been recognized by Sports Illustrated as “One of the most accomplished physically challenged athletes in the world.” He is also an accomplished author who has written books such as “Think Again: The Power of Possibility Thinking,” “Playing from the Heart: Turning Obstacles into Opportunity,” and “How High Can You Bounce? Turn Your Setbacks into Comebacks.” Throughout all his achievements, tennis has always been apart of Crawford’s life and the game, has opened doors for him that he never thought would be possible.

“When I walked out on the tennis court, I already felt like I won,” said Crawford. “Being out there and competing was such a tremendous blessing in my life and I wasn’t the best tennis player, but people would say ‘gosh if you had normal hands and normal legs think of how good you would have been’ and I would say ‘I’m not so sure.’ Because having hands and legs like mine, this is who I am. This is what I was given, and we all have a deck of cards we have to play, and this was mine. But when I look back on my life, if I was given the opportunity to change my hands and legs, I wouldn’t do it. Because in everyone’s life challenges are inevitable but defeat is optional.”